Finally: An interviewer who asked interesting questions. Many thanks to C.A. Milson. If you’re already familiar with the book, scroll down for the interview:

A power-hungry vice president, a bad batch of shady intelligence, and a sinister plot to destroy Western civilization.

Just another day in America.

On May 1, 2001, a group of radical Islamic terrorists crash a Boeing 737 jet airliner into the Mall of America—and Vice President Robert Hornsby knows his moment is coming.

The attack kills three thousand American citizens and throws an entire nation into a panic, but all Hornsby sees is an opportunity, a chance to imprint his fanatical values on the soul of the country he loves and become the most powerful vice president in American history.

With the aid of his affable but ineffectual president; the reluctant, conscience-stricken secretary of defense; and a preening, foppish faith leader with more than a few skeletons in his closet; Hornsby declares war on terror—and anyone who stands in his way. But as media scrutiny of the administration’s actions overseas intensifies, Hornby’s one-man campaign against evil begins to unravel—with striking parallels to the thirteenth century’s doomed Fourth Crusade—and sends the nation spiraling toward another deadly tragedy.

The American Crusade paints a grim and often cynical picture of America’s recent past, reflecting the attitudes, politics, and fears that shaped our nation in the new millennium. By sampling the contemporaneous French text on the Fourth Crusade, On the Conquest of Constantinople, author Mark Spivak reminds us of that ever-vital adage: “Those who cannot remember the past are condemned to repeat it.”

Fans of The Castle by Jack Pinter, The President Is Missing by Bill Clinton and James Patterson, House of Cards by Michael Dobbs, The Whistler by John Grisham, and the Aaron Sorkin–penned TV drama The West Wing will love this book. 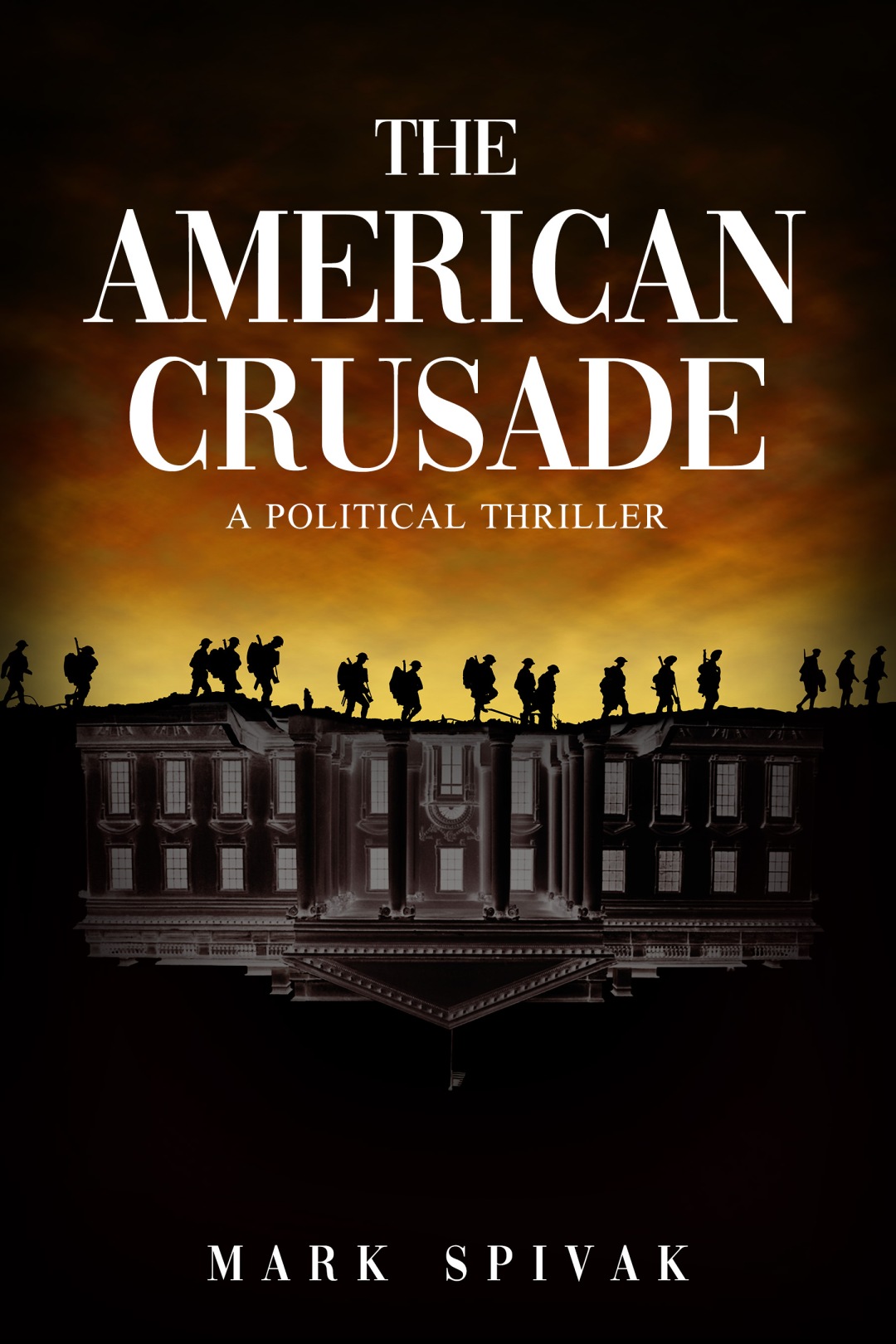 Sitting in the White House Situation Room that day, Vice President Hornsby thought he was witnessing the perfect storm. All those years we thought it would end with a nuclear launch from the Soviets, he thought bitterly. Now I have to watch a bunch of jokers in turbans destroy

FBI Director Edward Gambelli entered the room and approached the head of the table.

“Most of the planes are out of the sky, sir. The airspace is almost secure.”

“What do you mean, almost? For shit’s sake.” The Vice President gesture toward the electronic map on the wall, where aircraft were represented by red dots. “That’s a lot of dots, Eddie.”

“They’re mostly private planes, sir. Joyriders out for a spin. We’re contacting the ones that have radar. The fighters will intercept the others and escort them down.”

“What about the other plane?”

“How long before it gets into rural airspace?”

“Five minutes, sir. Ten at the most.”

“What’s happening on board?”

“We’ve received radio and cell phone communications. The passengers are still fighting. They’ve overcome two of the hijackers, and they’re trying to get into the cockpit.”

Hornsby glanced to his right, to the chair occupied by his protégé, CIA Director Admiral Mike McCardle. McCardle nodded.

“When it gets over unoccupied land, I want you to shoot it down.”

“Eddie, we have the tapes, correct?”

“These people are dead already. None of them can fly the plane. It’s the least we can do to bring comfort to their loved ones. The public will eat it up. The passengers will be heroes.”

“Eddie, that’s an order. Shoot it down once it gets over unoccupied land. I’ve got your back.”

In the realm of non-fiction, award-winning author Mark Spivak focuses on wine, spirits, food, restaurants and culinary travel. His first book, Iconic Spirits: An Intoxicating History, was published by Lyons Press in 2012. He followed this with Moonshine Nation (Lyons Press, 2014), hailed as the definitive book on illegal corn whiskey in America. From 1994-1999 he was the wine writer for the Palm Beach Post, and was honored for excellence in wine criticism “in a graceful and approachable style.” Since 2001 he has been the Wine & Spirits Editor for the Palm Beach Media Group, and contributes to a number of national magazines. He is also the holder of the Certificate and Advanced Diplomas from the Court of Master Sommeliers.

Mark’s first novel, Friend of the Devil, was published by Black Opal Books in May 2016. Set in Palm Beach in 1990, it tells the story of America’s most famous chef, who has sold his soul to the Devil for fame and fortune.

Mark also has an endless fascination with the American political system and is an avid follower of Washington politics. His second novel, The American Crusade (a gripping political thriller set during the invasion of Iraq, which dips into the shadowy world of government conspiracy and political sabotage), will be released by TCK Publishing on April 4. He is currently at work on Impeachment, the sequel to The American Crusade.

Pre-order The American Crusade on Amazon:

Mark Spivak will be awarding a $25 Amazon or Barnes and Noble GC to a randomly drawn winner via rafflecopter during the tour.

Enter to win a $25 Amazon/BN GC – a Rafflecopter giveaway

Tell us about you as a person.

I was definitely a bad boy in my youth, but my life now is pretty boring: many people think that being a writer is exciting, but the reality is sitting in front of a computer screen all day. I don’t know if this is unusual, but I love animals, and increasingly prefer them to people.

If you could hang out with one famous person for one day, who would it be and why?

Since you don’t specify if the person is alive or dead, I’d have to say Mark Twain. I think one day with him would provide enough amusement, insight and wisdom for the rest of my life.

What’s the story behind your latest book?

The American Crusade is a political thriller set during the invasion of Iraq, with flashbacks to the Fourth Crusade (1200-1202). I was reading about the Crusades some years back, and I was struck by the parallel: the Iraq invasion was the instant replay of the Fourth Crusade, down to some very small details. The novel is a meditation on the follies of history, with the steamy underbelly of Washington politics thrown in for good measure.

What is your writing process?

I’m up very early, about 4 or 4:30am, which is when most of the productive work gets done. I still do a lot of journalism, so the emails and phone calls start around 10am. I work intermittently throughout the day, but I find I do my best with fewer distractions.

Tell us about your main character:

Most of the novel is told through the eyes of Robert Barton Hornsby, the vice president and former CIA director. He’s the puppet master, and the spy who refused to come in from the cold.

If your book was to be turned into a movie, who would play the lead role and why.

That’s a tough question, but I think Robert Duval might be able to do it: he definitely has the gravitas. An even better choice would be Anthony Hopkins, who could infuse the role with an underlying, simmering touch of evil.

What are you working on next?

I’m finishing up the sequel to The American Crusade, tentatively titled Impeachment.

What advice do you have for other writers who want to get the word out about their book?

It’s a long, slow, gradual and grueling process for most people (if you can get on Oprah, this doesn’t apply). I mentor beginning writers through a Meetup group, and they freak out when I tell them that writing the book is the easy part. I think the single best piece of advice for anyone would be to focus on Amazon. That’s where the majority of books are sold now, at least in electronic form. It’s hard to avoid social media, and I indulge in it myself, but you need to understand that it’s a waste of time unless you have a huge promotional budget.

What is your favorite book on your shelf right now?

I just finished reading The Culture Code, by Daniel Coyle. It’s a fascinating study of what successful cultures have in common; he focuses on organizations as diverse as Johnson & Johnson and the Navy Seals. Hint: brutal honesty has something to do with it.

Do you have any special/extraordinary talents?

My extraordinary talent is the ordinary attribute of perseverance. It’s nice to think that the most talented writers are the ones who succeed, but very often it’s the ones who simply refuse to give up. I suspect this is true in most other fields as well.

You are given the choice of one super power. What super power would you have and why?

Here’s where we get into cliché. If I could get away with it without striking a deal with Satan, I’d like to live forever. No, I wouldn’t get bored. Yes, I’d have to outlive some people I loved, but that’s already happened. Yes, I’d know the answers to many of life’s fundamental questions and no one would listen to me, but most of them aren’t listening now. I’d just like to stick around without taking my chances on reincarnation.

At the moment, they’re all travel-related (even though I’ve traveled pretty widely):

Where can readers find you on the web?

Thanks for having me today and listening to my ramblings (assuming people got this far). I hope you enjoy The American Crusade. Does history repeat itself, or are we constantly repeating it? You make the call.